“I was for weeks, a poor, brokenhearted mourner, traveling through the darkness and misery of doubts and fears. I finally found that change of heart which comes by ‘casting all one’s care’ upon God, and by having faith in Jesus Christ, as the Redeemer, Friend, and Savior of those who diligently seek Him. After this, I saw the world in a new light. I seemed to live in a new world, surrounded by new objects, and to be animated by new hopes and desires. I loved all mankind – slaveholders not excepted; though I abhorred slavery more than ever. My great concern was, now, to have the world converted. The desire for knowledge increased, and especially did I want a thorough acquaintance with the contents of the Bible…”

That was part of Fredrick Douglass’ description of his conversion under the preaching of a Methodist preacher (Fredrick Douglass, My Bondage and My Freedom, (Public Domain, 1855), 68 (Kindle Edition). 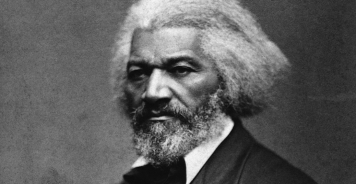 The first step in conversion according to John Wesley is repentance after one is brought under conviction by the Spirit through the prevenient grace, which prepares and enables one to receive the gift of salvation by faith. In repentance we grieve and mourn over our sins and turn from sin and reliance upon ourselves, and we turn to Jesus Christ. Jesus said, “blessed are those who mourn, for they shall be comforted” (Matt 5:4ESV). Could it be that one problem in the church today is that there is too little mourning? Are we too often today hearing preaching that makes us more comfortable with sin than we are with Jesus as he is revealed in scripture? Blessed are those who grieve over sin! It is they who shall rejoice in the comfort of the Saviors’ forgiveness and transforming grace.

Through faith, trusting in Christ alone, not just mental assent to a set of propositions, but trusting in the person of Christ and his atoning work on the cross, brings justification, a relative change in our standing before God, which Wesley often described simply as the forgiveness of sins. At the moment of justification we also receive the gift of the new birth (regeneration), the beginning of sanctification and the renewed mind, whereby a real change is wrought within our hearts and God’s love begins to reign giving us, as Douglass said, “new hopes and new desires.”

This inward change sets our hearts ablaze with love for God and all humanity, including, as in the case of Douglass, even those who oppress us, and makes us zealous for good works (see Titus 2:11-14), what Wesley called works of piety, representative of love for God, and works of mercy, love for our neighbors. Works of mercy would also include, again, as in the case of Douglass, an abhorrence of sin and evil and corrupt evil institutions, and the passion to fight to see the oppressed and oppressors set free from bondage to the evil one. Works of piety and mercy spring from a renewed heart upon which the Spirit writes God’s essential and nonnegotiable moral law. The moral law, which Wesley clearly viewed as an essential doctrine and an absolutely vital part of the genuine Christian life provides the content of the holy love that God pours into our hearts (Rom 5:5) as well as the renewed image of God in which humanity was created.

That Wesley viewed the moral law as essential is evident even in his oft misused sermon on the “Catholic Spirit” (Sermon 39). There you find that Wesley describing the love of God as including a hatred of all evil ways, which he defines as “every transgression of his holy and perfect law” (I:16). Moreover, Wesley, there, also describes love of neighbor as a love for “all mankind without exception” including enemies 0f God and one’s self (I:17). This kind of love is clearly evident in Douglass’ description of his own conversion. Works of piety and mercy spring from this holy love of God and neighbor summed up in the two tables of the Ten Commandments, the first dealing with love of God, the second with love of neighbor.

These good works FOR which we are saved (see Eph 2:8-10), are the fruit of genuine faith, which become the fuel for continued growth in holy love and in the mind of Christ (i.e. the means of grace for sanctification). Diligently and hungrily searching and digesting the scriptures will be a major component of this growth. As fruit that can be inspected, these good works are the marks of a genuine Christian life in the kingdom of God, which was the new world that Fredrick Douglass was, and all believers are, reborn to live into (see John 3:1-8). In a word this is Christian salvation, which, according to Wesley, is a present tense reality to be consummated in glory in the resurrection of the body and in the New Creation.

(For Further Study see Kenneth Collins “The Theology of John Wesley: Holy Love and the shape of Grace)