Over the past week, I’ve had the honor of presiding over the funerals of two precious saints of the Lord. One, Mrs. Pattie Mae Swisher, was 94. She served as a Sunday School teacher for young children for 50 years, among other invaluable service rendered in the church. What a testimony to faithfulness! The other beloved saint, Doris Kurfees was 87. Doris was a woman with a servant’s heart and a mind renewed by word of God, which dwelled in her richly even though dementia inhibited her expression of it over the past couple of years. Doris served well, adding a touch of beauty as much as she could to everything she did to bless her family, the church, and the community. Both Pattie and Doris were sweet spirits who were much beloved because they both loved much.

I’ve just been thinking about what it must be like for both of them as they entered into the joy of the Lord in Heaven at about the same time as Rev. Dr. Billy Graham. He went home to be with the Lord February 21st, just a few days after Pattie and only two days before Doris. Would the celebration of their entrance into the heavenly kingdom of God pale in comparison to Rev. Graham? 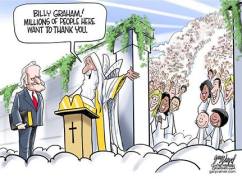 thank you. But from what I know of Rev. Graham he would point them all back to the cross and say that they all, including him, should only give thanks to Jesus. Indeed, Brother Billy said himself,

I won’t be in heaven because I’ve preached to large crowds or because I’ve tried to live a good life. I’ll be in heaven for one reason: Many years ago I put my faith and trust in Jesus Christ, who died on the cross to make our forgiveness possible and rose again from the dead to give us eternal life. ~ Billy Graham 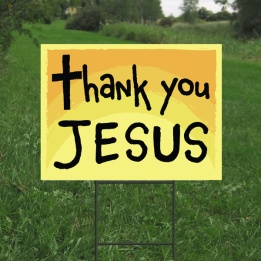 In light of Jesus’ parables on the lost sheep (Luke 15:3-7), I know there is an abundance of joy in heaven over each sinner who repents. I think there will also be plenty of celebration over each saint who is welcomed into God’s heavenly kingdom after death. And considering what the Apostle Paul said about the seemingly weaker members of the body of Christ being indispensable and worthy of more honor ( 1 Cor 12:21-26), I think there will be also be plenty of honor for the countless number of saints, who weren’t known much at all outside of their own communities.

Whoever enters into the joy of the Lord and that eternal rest from the trials and tribulations of this fallen world can only thank God for what he has done for us through Christ and what he has done in us and through us by the power of the Holy Spirit. Thank God for all the saints in glory—like Pattie, Doris, and Billy Graham—whose gifts, whatever they may have been, were used to build up the body of Christ in love here on earth! To God be the glory!