The last couple of weeks of June seemed to go by at barely the pace of a commando crawl. The anticipation of Christi going into labor almost made time stand still. But the past several weeks since Benjamin was born on June 26th have been a blur.

To say this has been a busy and hectic summer would be an understatement. As we awaited the arrival of Benjamin, we also threw a birthday party for Catherine, who turned 3 on June 22. Ian turned 15 on the 20th; my birthday came on the 21st. Our oldest child, Grace, had to be dropped off or picked up at “Governor’s School” in Raleigh thrice, beginning on Father’s Day. Thankfully Christi’s Mom and Dad could take her at the beginning as we anticipated the arrival of Grace’s baby brother at any moment. Our son Ian had basketball practice three days a week for their team summer camp at Guildford College all through June. And I had to work out the logistics of getting my own mother enrolled in a community based senior care program called PACE, which started for her in June too.

I took Anna, Silas, and Catherine to Vacation Bible School each evening the third week of June with the anxiety of knowing Christi could go into labor at any moment. After the first day of VBS, Catherine ended up with a bad rash. Apparently she’s allergic to the sun screen I sprayed on the kids before they enjoyed the waters slides and bouncy houses that we had to kick off VBS. We ended up in the ER for that on Tuesday. Thankfully, Catherine responded quickly to treatments.

Delivering Benjamin at home with a midwife went very smoothly once Christi finally went into labor—if you can call 20 plus hours of labor smooth! It was definitely smoother for me than it was for my wife. Nevertheless, it was an awesome experience as Christi eventually delivered baby Benjamin in the bathtub, although that wasn’t initially her plan. The contrast between the excruciating pain just prior to delivery to the exhilarating joy immediately afterwards was amazing to watch. Christi and Benjamin have both been doing great ever since. 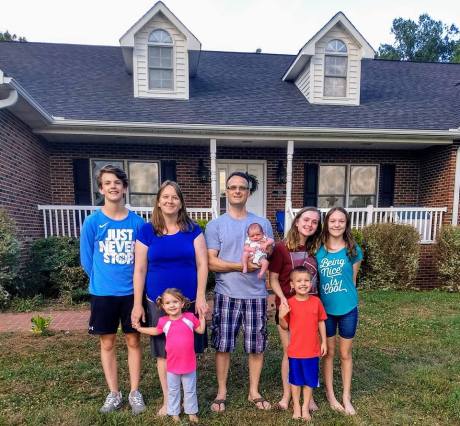 The day after Benjamin arrived I took Ian to the DMV to get his learner’s permit. Thankfully, Christi’s mother was staying with us to help out. A few days later we had to have a new washing machine delivered. The old one had started leaking oil onto the floor and our clothes. The day of delivery Lowe’s showed up a lot earlier than we had been told. I was rocking Benjamin and watching our semi-potty trained—note the emphasis on semi—three year old daughter, Catherine, and our four year old son, Silas. While I was waiting for the baby bottle to warm up, and trying to keep Benjamin content so he wouldn’t cry and wake his exhausted mama from a much needed nap, Catherine ran up to me and said, “Daddy I have to go potty!” She had actually already gone … in her pants! It was number 2! And Christi’s mother was gone to see my brother-in-law.

Benjamin was on the verge of wailing; but somehow I kept him content in my left arm while I tended to Catherine with my right. I took Catherine to the toilet and carefully flipped “the contents” of her pants into the toilet. I then removed her soiled clothes, cleaned her up with a wash cloth, and put clean clothes on her. I did all of this with my right hand as I held the baby semi-content with my left. After washing my hand, I retrieved the warm bottle of milk and began feeding Benjamin just before he would have erupted into window-rattling wailing that would have surely awakened my sleeping beauty.

All was well, or so I thought. Then … the doorbell rang! It was Lowe’s with our washer. So much for Christi’s beauty sleep! Despite my heroic efforts—I do have a blue “Super Dad T-Shirt with a red cape—to keep Benjamin content, the doorbell woke her up. Thankfully, she was still able to sleep for a few hours later that afternoon.

In addition to the needs of my family, I have preached every Sunday but one since Benjamin was born, as well as tending to the other responsibilities of pastoral ministry, some expected, others not. I also preached a four-night Spirit-filled revival the third week of July, the week after Anna and Ian returned from a week-long youth mission trip. I had agreed to preach the revival series about ten months prior. And among many other things, last week I conducted the funeral service for a church member that cancer took from us way too soon. But Pam faced death with faith in Jesus and the power of resurrection. She was an inspiration!

This summer I’ve also been proofreading and editing an almost 240 page manuscript that I may try to get published. I’ve enjoyed reading Saint Augustine’s classic work simply called Teaching Christianity too.On July 20th I wrote a blog article to dispel some myths regarding Jesus’ prayer in John 17; during which time I was also engaged in some debate on social media with some of the most prominent and powerful ministers in the United Methodist Church. For that and other obvious reasons this hasn’t been the most restful and relaxing summer, but we have had a lot of fun and experienced an abundance joy.

It’s been an event-filled, full summer! Exhilarating and exhausting. Hectic and hilarious. Trying and triumphant. Above all, because of the grace of God, the hope of Jesus Christ, and the fellowship of the Holy Spirit, blessed. Thank you, Lord!