. . . the most urgent contemporary mission field is to be found in their own traditional heartlands, and that the most aggressive paganism with which they have to engage is the ideology that now controls the “developed” world.

U.S. Congressman Emanuel Cleaver of Missouri made headlines by closing his prayer to open a session of congress with “Amen” and “Awoman.” Ironically, his silly attempt to be politically correct and inclusive would break the rule that many progressives in congress, including Nancy Pelosi, want to impose. They want to prohibit the use of any gender distinguishing terms like man and woman, husband and wife, and mother and father. Amen, however, has about as much reference to men as menopause (except for the ideologues that would insist men actually can experience menopause, periods, and pregnancy while also trying to ban gender distinguishing terms). Amen is simply a Hebrew word to express affirmation that one believes a claim to be true or to express the desire for the will of God to become a real and living reality in the lives of people and God’s good world. But make no mistake, the manipulation of and the battle to control language and speech like this is about controlling people and using the coercive power of government to punish those who would dare dissent. It might be silly, but it’s no joke.

Also of concern is that Representative Cleaver, who is also Reverend Cleaver, a graduate of a United Methodist seminary and an ordained United Methodist clergyman, evoked the Hindu god Brahma in his prayer as he implied that Brahma is just another name for the same monotheistic God revealed in the Bible. This seems to be a confused attempt on Cleaver’s part to fill the term monotheism with syncretistic pantheistic meaning. This isn’t surprising as he doesn’t seem to be too concerned about the actual meaning of words.

Brahma is not equivalent to Yahweh, the name of the God revealed in Jesus in the New Testament to be the one God: Father, Son, and the Holy Spirit. In a nutshell, in Hindu thought Brahma is one of many expressions of the all-encompassing and only true reality called Brahman. While some view Brahman as an impersonal force and consciousness, others see Brahman as a personal being that is ultimate reality and the only real consciousness that pervades everything. It’s not, however, that Brahman is merely in everything, Brahman is everything and everything is Brahman. Distinctions between Brahman and its perceived innumerable expressions are an illusion that results from ignorance that Brahman is all that really exists. The god Brahma is one of many expressions that brings the world of illusion (the world we live in) into existence. Brahma is the creative force. Vishnu is the god that sustains the world that is prone to cyclical decay until it can no longer overcome the forces of decay. At this point the god Shiva, the god of death and destruction, destroys the world. Then Brahma creates it anew to repeat the same cycle all over again infinitely.

The individual souls that make up the ultimate soul, Brahman, within and through these cycles go through a process of reincarnation after death in which they may become reembodied in the form of any type of creature. This cycle is viewed as a curse from which people should seek release and is due to ignorance that all is Brahman and Brahman is all. This release, called moksha, can be achieved via many different paths. Devotion to the any number of gods and goddesses, various forms of study and meditation, and fulfilling the duty of one’s social status (i.e. within the caste system), which traditionally excludes the possibility of moving into higher classes in this life, are the means by which people may work toward enlightenment and the release of moksha. This is to lose one’s distinctive identity and consciousness by achieving total unity with Brahman.

In this worldview there is no real distinction between the universe and Brahman. Hinduism is inherently diverse and therefore there are many different paths to achieve moksha. Through one’s efforts a person develops karma. Karma, good or bad, determines the fate of people in the cycle of reincarnation or their release from it. Ritualistic devotion to any number of the countless gods may attract their favor to help a person build up positive karma in hope of eventually achieving release from the reincarnational cycle of life. The overall cycle of creation and destruction via the work of Brahma, Vishnu, and Shiva seems to be endless. Human history as an illusion is not really headed anywhere in terms of a real permanent existence. This way of thinking about the nature of God, human nature, and the world is not the same as the Biblical Christian worldview. It’s a worldview that is contradictory and competing to the orthodox Christian worldview, which precludes syncretism.

Like paganism in general, Hinduism can be tolerant of almost any path except one, the path that claims there is only one true path. As Christians experienced with ancient Greco-Roman paganism, there are definite limits to Hindu tolerance, at least within Hinduism itself (not to say that all Hindus would seek to impose their worldview on Christians). Jesus can be accepted as a way but not the only way. Jesus as the only way is inherently related to the concept and the claim behind the First Commandment: the Creator of the universe is the only God to whom humans are to direct worshipful devotion. The Creator, who revealed himself as Yahweh and in the unique incarnation in Jesus as the Father, Son, and Holy Spirit, is not a expression of ultimate reality; he is ultimate reality. He is a personal being, the source of all other forms of being, who created the universe out of nothing. There is no force apart from God to which God is subject or dependent. The universe exists not as an endless cycle that is only an illusion. The universe is the real and good creation of God that is dependent upon God for its existence, but God in no way is dependent upon it for His existence. God is timeless and eternal; the universe had a beginning.

Humans were created in God’s image with free will to reign under God’s authority to bring blessing to the rest of God’s good creation. Idolatry is the illusion that human happiness and blessing and harmony and peace in the world can be achieved apart from total devotion to the one and only true God. Hence, the First Commandment. 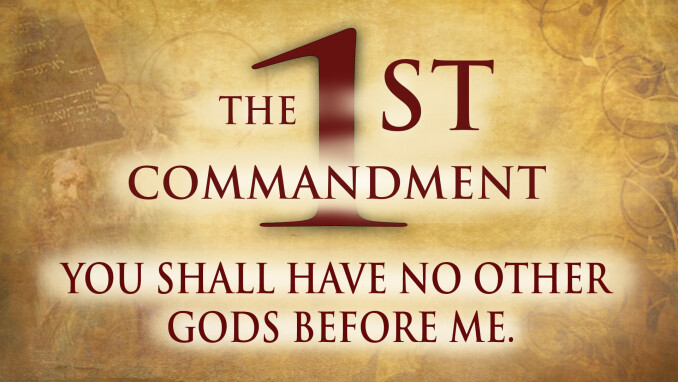 Salvation is by receiving God’s grace through faith in Jesus Christ as the gift that it is in this one life that he has given us to live in this world not by working to build up good karma over the course of countless lifetimes. Christian salvation is not to escape the world, but to be redeemed for the sake of the world and to pray for God’s kingdom to come in all its glory on earth as it is in heaven. History has a final and eternal destiny with humanity and the rest of God’s good creation in perfect harmony with the will of God but not at the expense of our creaturely and conscious existence distinct from God.

While there are some marginal similarities between the worship of Brahma and the God of the Bible, they each represent very different worldviews that are contradictory and competing. Both might be false, but both can’t be true. From a Biblical point of view one might as well pray to Baal as to pray to Brahma. By the way, it’s not the Hindu forms of paganism that we really need to be concerned about. It’s the aggressive and intolerant version that’s engulfed many Christian denominations and secular western society that Lesslie Newbigin warned about that is of real concern. But God is faithful and will never leave or forsake the faithful.

If the Bible is true, the First Commandment is still relevant for Christians today. I believe that it is. Can I get an amen?